Foreign Minister Michael Farr was invited to attend an audience with Pope Francis in the Vatican City State today. Farr on a diplomatic mission to the Vatican and Italy noted that West Who is even smaller than the Vatican in size. "It is wonderful that the Vatican includes diplomats from micronations at events where the Pope speaks."  The Swiss Guard was aware of the Foreign Minister's visit, though Farr declined any protection while visiting the Vatican.  Farr said, "It's just not necessary.  I felt completely safe and welcomed." 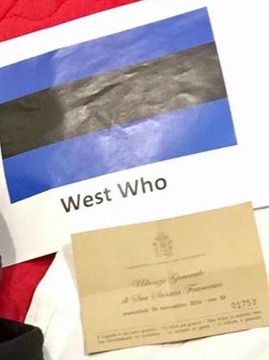 Pictured here is Pope Francis and the official Vatican invitation extended to the Foreign Minister.
Back