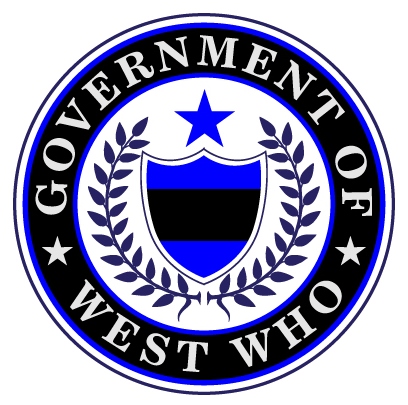 Office of the President of West Who

MESSAGE FROM THE PRESIDENT

Welcome to the West Who website here you will find everything you need to know about West Who - and there is not a doubt that West Who is one of the most unique micronations in the world.  Learn about our history, unique culture, great food, art and heritage.  Our history dates back to 1969, read about our great heroes and citizens who forged the way for West Who today.  You will find information on this site about what makes West Who the modern, vibrant, happy nation it is today.  As President, I encourage you to experience this site and find out what West Who is all about - and to have lots of fun along the way.  After all being part of West Who is fun.

President Farr, Republic of West Who

Message from the Space Director

Can a small nation have an impact on the study of space?  Yes, we can.  The purpose of the West Who Space and Planet Exploration Agency (SPEA) is to develop programs and activities involving science and technology that support the priorities of the Government of the Republic of West Who.  SPEA directs its resources and activities in four key areas:

Message from the Minister of the Environment

We strive to ensure that West Who remains a vibrant, prosperous and productive country, while taking into account the neads of future generations and the environment.  We have a range of initiatives and programs aimed at protecting and improving the environent and encouraging sustainable development.

We work with local communities, government and non-government organizations, and individuals to deliver these objectives:

These include: conservation and restoration of natural habitats and species; improving air, land and water quality; reducing the impact of climate change; promoting energy efficiency and renewable energy; reducing waste and pollution; promoting sustainable development; promoting public participation in environmental decision-making.  We also work with partners to develop and implement effective environmental policies and regulations, and to raise public awareness of environmental issues.

Our purpose is to insure that the Republic of West Who is the most liveable place in the world.

Margaret Neiderer - Minister of the Environment

Message from the Chief Justice of the Supreme Court

Message about the West Who Supreme Court

The Supreme Court has a special role to play in the West Who system of government. The Basic Law gives it the power to check, if necessary, the actions of the President and the Senate.

The Supreme Court is the final judge in all cases involving laws passed by the Senate and other government bodies. It alone interprets the highest law of all — the West Who Basic Law.

Since 1969 West Who has been an independent nation, with citizens living in over 40 nations around the world.