West Who President William Farr was awarded the Order of the Silver Lion by the Principality of Aigues-Mortes, located in Southern France. Baroness Barbara of Bieniak Betz of Aigues-Mortes said the President was being honored as a micronational leader.  "I am pleased to be honored with the award.  We value our relations with the Principality" said the President.  A government spokesperson said Baroness Barbara had contacted the Foreign Ministry about the international  award.  President Farr was the first West Who leader so honored. 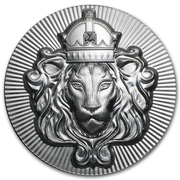 Order of the Silver Lion award