The Ministry of Foreign Affairs is pleased to announce that the Republic of West Who and the Confederation Austral of Angosvria, a micronation located in South America have signed a treaty of diplomatic relations.  The treaty negotiated by Foreign Minister Michae Farr was signed by President William Farr and Angosvria President Guillermo Wohiker. This is the 37th nation that West Who has established official relations with. 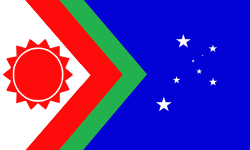